View source
This has been removed from Vesteria. This page has been protected to prevent vandalism.

A New Adventure was a location in Vesteria that served as an introduction to players who first started the game. This location could not have been accessed after the player had teleported out of it.

When the player first enters this location, a opening cutscene shortly plays, which serves as the game's intro, showcasing the various developers and giving credit. At the end of the Credits playing, the cutscene reveals a Vesterian acting as the wagon driver commanding 2 horses to pull the wagon forward. After a couple of minutes, 1 of the 4 Vesterians in the wagon raises their concern about the mushrooms that seem to be watching them. These turn out to be Baby Shrooms around them. The wagon driver assures them that there is nothing to worry about as he has traversed the same roads for many years. Another concerned Vesterian then asks the player if they happen to have anything in their inventory they could use as a weapon, which prompts the player's inventory to open. The only thing in the player's inventory is a Stick, allowing players to equip it in their weapon slot. This sort of resembles a tutorial, as to how to equip things and open your inventory. Moments later, a Baby Shroom intentionally steps in front of the wagon, halting it to a stop. The screen is then directed to a horde of mobs of the Shroom family incoming from atop a nearby hill. The player is then taken out of the cutscene and into gameplay. Various Shrooms, Baby Shrooms, and Elder Shrooms spawn in and attack. The longer the player survives, the more mobs spawn. If the player survives long enough, a Chad spawns in as a last ditch effort to kill the player. 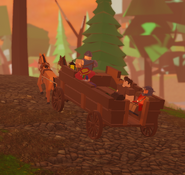 Shrooms attacking, along with Chad.
Community content is available under CC-BY-SA unless otherwise noted.
Advertisement